Proteus Book 2 - The Long Way Round 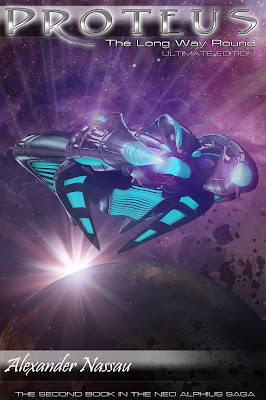 I am pleased to announce the arrival of Proteus - The Long Way Round, the second book in the Proteus Neo Alphius Saga.

Here is the Blurb:
"Saya and her crew have reluctantly left the diseased world of Neo Alphius behind, their mission simple. Return back to the desolate remains Alphius Prime to rescue the crew of Terrik, stranded for nearly three hundred years following the cataclysm that destroyed their home. With no idea where home really is the only clue they have is the distress call from Grand Council Neyra and a plan to attempt to triangulate the path home. It does not take long for Zenni and her team to realise they are not alone in this universe as they venture in to the darkness, mysterious transmissions and strange phenomenon grabbing their attention as they push deeper.

On Neo Alphius thing are not progressing well, the plague is not as easily cured as they had hoped. With Grand Council Orles near death, Miras deteriorating and unrest in the villages there is treachery in the air as Mara plans to seize control and lead the survivors down a perilous path.

Back out in the depth of space the crew of Saya make a shocking discovery, finding a strange trading station which hold more than a few surprises, not least the news that they were not the only ship to escape Alphius Prime's end, the crew of Koli having passed through the station some hundred and fifty years before, but it is not long before they make an even darker discovery that offers hope to find their long lost home world.

Will Zenni return to the ruins of Alphius Prime and rescue the survivors of Terrik, will Orles and her friends stop Mara from destroying the plan to save their people from the plague and what secret does a mysterious dark warship have in store our heroes?"

Following on from the events in Proteus The Lost World, follow the strange and thought provoking adventure of a strange crew of misfits and heroes as they search for the path back to their home meeting the most bizarre and strange aliens along the way.
With action, humour, shocks and thrills and a few twists for good measure, The Long Way Round is sure to entertain.
Also featuring the mini science story 'A Curious Mind Part 2', following young Roch as she looks at the biological side of Alphian physiology.