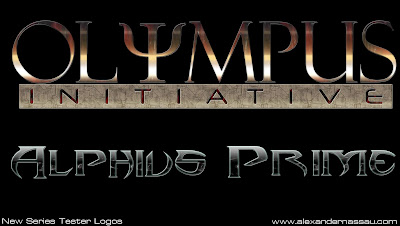 I know... It's been a while since I posted something. I have been very busy working on the latest batch of releases and while they are taking their time I do have some news.

Coming soon will be two brand new series to join my existing line up.

The Olympus Initiative will be getting its own series starting with the first book, One Small Step.

Secondly I am bringing you an entirely new series called Alphius Prime.
Filling you in I am very excited about the first of this three part series titled Of Beasts and Monsters.
I have nearly finished the first proof of the book... and here is the teaser

"Meylon City was known to have been a jewel, home of the enlightened Vu'kno, yet it was not the only great city on Alphius Prime. There was another city, a city where life was not so idyllic. High in the Northern Mountains, in the cold wastelands of the Horik range of volcanoes stood the city of Eralon. It was a cold brutal place where nearly two million Usha lived, scraping a meagre existence from the soils, a place ruled over by the sadistic Warlord Thrax.

For Echo Sana, this was her home and a place she hated almost as much as she hated her father. Holding the bitter title of Daughter of the Warlord, Echo's goal in life was to cause him as much pain and suffering as she could. The truth was she was not Thrax's daughter, the Warlord having killed her real father and taken her mother as his prized possession. After seeing Thrax kill her mother in front of her, she vowed to see this psychopath fall.

Perhaps it was childish innocence to think that Thrax would tolerate her forever and after being caught red handed Echo finds herself sentenced to death by Thrax. Taken out of the city in to the mountains, Echo finds she has more friends than she realised, a young warrior charged with her execution letting her go with the hope she could finally break free of Thrax's brutality and start a new life far away from Eralon.

The path before her is dangerous as she tries to find her way, but there are far more dangerous things in the mountains. There are Kinar Beasts, monstrous killers that prey on the unsuspecting. The truth is Echo will never reach the far side of the mountains to start her new life.

Meeting new and strange friends, Echo Sana is about to start an adventure of a lifetime which will see her change the world even if she is utterly innocent of what the future holds for her as she gains a new title, one that will bring hope to people. She will become the legend only known as the Whisperer."
at March 21, 2019
Email ThisBlogThis!Share to TwitterShare to FacebookShare to Pinterest
Newer Posts Older Posts Home
Subscribe to: Posts (Atom)