Children of the Empire Cover Tease 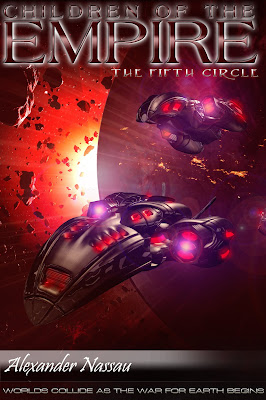 Nuff said. Logo done, cover done for the first book... missing something...
Oh... not finished writing it yet although 3 chapters in now....
at May 20, 2019
Email ThisBlogThis!Share to TwitterShare to FacebookShare to Pinterest

Well, glutton for punishment and with my infinately scatty brain working overtime, I have a new series that will be coming probably in 2020.
Aioria is set after Children of the Empire and while featuring a few familiar faces from the Olympus Initiative, it is a stand alone series set on Earth in our near future.


"With a rogue comet about to slam in to Earth, the Olympus Initiative springs in to action, dealing with the threat to our fragile world, humanity watching on with baited breath.


Very little of this is of much concern to Doctor Kara Tolen though, locked away in her research lab at Androcore Industries. Her only concern is delivering her research in to positronic neural networking systems and the fact she can't deliver on the promise resting on her shoulders. Frustrated and angry, her day is only going to get worse as she spills her coffee on the heart of the billion dollar project known as Oria.
Except she hasn't wrecked it. For some unknown reason, it starts to work.
It does not take long for Kara to realise that this is not what she had been working on, the system behaving more like a human mind, its neural paths starting to unfold in almost an organic way and it is learning and evolving. The truth is she had accidentally created a fully conscious artificial intelligence and one that is quickly adapting to its environment.
She needs to know how this happened, keeping this reality a secret from her superiors except this new life is reaching out to the world around it, trying to find its place and understand who it is and where it came from. Utilising Androcore's vast robotics research and development department, the AI creates itself a new body to house the Oria project however this was never going to go unnoticed.
Kara realises that if Aioria as it has named itself is taken away from her, her superiors will disassemble it to try to find out how this new life was created so they can make more. They will kill this new life to learn its secrets.
There is no choice. She has to get Aioria out of Androcore to protect him.
She has to go on the run with no clue where this journey will take her and the secrets this strange and precious new life will teach her.
Life may be an accident, but it's never a mistake."

Aioria will surprise and delight as you follow the journey of Kara and this strange new life and expect a few massive twists in the story as it unfolds. The series is expected to form a trilogy of books starting with book 1 - Innocence.

Theme wise, I was looking through some music and Really Slow Motion's beautiful Aeorien (yeah, similar name even) really works beautifully for this series.
at May 20, 2019
Email ThisBlogThis!Share to TwitterShare to FacebookShare to Pinterest
Newer Posts Older Posts Home
Subscribe to: Posts (Atom)