Proteus Art - The Ghosts of Delasia 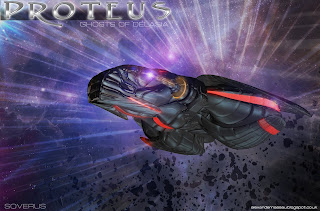 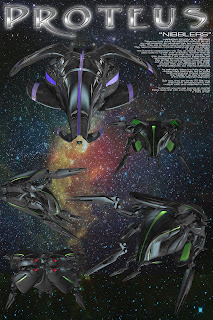 I thought I would throw out a few additional pieces of artwork from my new upcoming series.

First is Soverus. He (yes, it is a male ship) is an Avoran Warship...

The second is a Technical spec for "The Nibblers".
These tiny little ships (if that is what you can call them as technically they have no internal structure) are effectively the Borg of my books, except they are nothing like the Borg.
Each individual ship is a life in its own right capable of independent thought, but they aren't that bright. They were designed as drones, little works ships given a task to complete. The problem was they needed to cooperate with each other to complete their tasks and that led to a terrifying conclusion. They realised that working together as a hive mind they were capable of so much more than their individual parts. Secretly, and almost organically they started to clump together in groups until unbeknown to the Avorans, they became a collective consciousness.
The Nibblers are millions of ships, but all acting with one will, even if at times that will is divided.
As Rogue would say, when they put their minds to something they are unstoppable, but if they disagree chaos will erupt. There have been mass brawls between different factions of Nibblers stretching over hundreds of thousands of miles. When that happens the Nibblers turn to the Sentinals of which Rogue is a member. They see the Sentinals as their closest family and they are the ones who must try to keep the peace.
In general the Nibblers are affectionate, driven and can do astonishing things when they work together, but as a collective hive mind, they are almost always on a knife edge between order and chaos.
They are cute too...