"A year from now, Beletrix will be destroyed. Nearly everyone you hold dear will perish because of a mistake you will both make because you were being kind. It starts with the human's adopted ship, Aurora. When she came to Earth so long ago, she was one of four sisters. Her Avoran crew abandoned her there, but the other three ships travelled to their home system. Aurora will make contact with her sisters and will try to escape and you will help her and discover a place of wonders and death. A team from Beletrix will go there aboard Miras and Saya and they will uncover the secret of the Avorans, a promise of unlimited energy but a bringer of death as well. It is what destroys Beletrix. Only Koli, Saya, Qidgee and Norcee escape. Miras, Terrik, and the other younger sisters will perish alongside our friends and family, as will the young Emperor to be, Tath and so the horrible spiral of destruction begins. The Emperor's heart breaks at the news of his son's death, and within six months, he passes and the Apeyron fall in to civil war. Razon's madness is rekindled. With the remaining survivors of Beletrix settling on Aemus to mount a defence, Earth is wiped out as the start of the Second Apeyron war begins. The human race is extinguished. After a long and bitter war, the Apeyron are annihilated, but Aemus lies in ruins, billions dead. During the war, the Proteus family grows hundreds of individuals filling the sky but in time, the survivors of the Vu'kno reach the end of their natural lives and the only remaining legacy of our once proud species is Proteus."

That passage will be familiar to readers of my work. It is the Koli from 1700 years in our future as she returns to our time to right a terrible mistake she made and prevent that nightmare from ever happening.

With Proteus as a series approaching its end, the upcoming Proteus Unbound Series has long been known about and it deals with the fall out of what old Koli did, breaking the laws of time itself to prevent that history from ever occuring. However as I have been working on Proteus Odyssey and Apotheca, setting the stage for those two series, it was becoming clear that the story of the Future That Never Was was growing beyond this simple starting point. In fact I had already go the basics of that entire timeline down.

It became clear to me that in the telling of Unbound, Odyssey and Apotheca, I really needed to tell the story of the Thousand Year War and as a result, I have now laid out a new 12 book series that will run alongside Proteus Unbound, aptly titled Proteus Apocalypse.

In the series you will learn the whole story as well as meet a new cast. In fact I have already created thirty new and unique Proteus ships that will star in the series, adding to those that have already been put forward in the other series. So... may as well do an introduction... 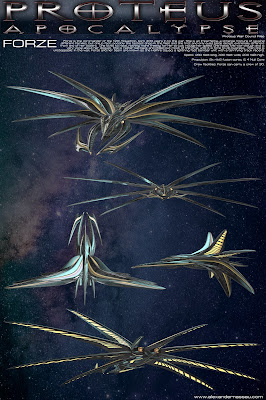 Expect more on this soon.