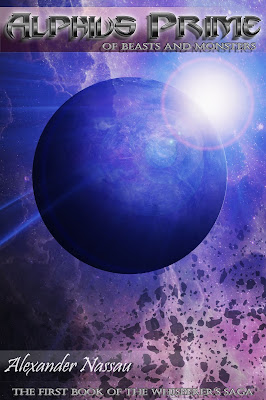 It has been quite some time since I released a new book and this may come as a surprise as it is an entirely new series with a whole new cast of characters. Perhaps even more of a surprise is the book while based in my well established scifi universe, is actually more medieval fantasy.
Say hello to Alphius Prime, the story of the end of the world through very different eyes.

Also available at other afflicated retailers priced at $4.99 for the Ebook
The book is suitable for Teens upwards.


Here is the Blurb:

"Meylon City was known to have been a jewel, home of the enlightened Vu'kno, yet it was not the only great city on Alphius Prime. There was another city, a city where life was not so idyllic. High in the Northern Mountains, in the cold wastelands of the Horik range of volcanoes stood the city of Eralon. It was a cold brutal place where nearly two million Usha lived, scraping a meagre existence from the soils, a place ruled over by the sadistic Warlord Thrax.
For Echo Sana, this was her home and a place she hated almost as much as she hated her father. Holding the bitter title of Daughter of the Warlord, Echo's goal in life was to cause him as much pain and suffering as she could. The truth was she was not Thrax's daughter, the Warlord having killed her real father and taken her mother as his prized possession. After seeing Thrax kill her mother in front of her, she vowed to see this psychopath pay for his heinous crimes.
Perhaps it was childish innocence to think that Thrax would tolerate her forever and after being caught red handed Echo finds herself sentenced to death by Thrax. Taken out of the city in to the mountains, Echo finds she has more friends than she realised, the young warrior charged with her execution letting her go in the hope she could finally break free of Thrax's brutality and start a new life far away from Eralon.
The path before her is fraught as she tries to find her way through the impossible snow storms, but there are far more dangerous things in the mountains. There are Kinar Beasts, monstrous killers that prey on the unsuspecting. The truth is Echo never reaches the far side of the mountains to start her new life.
Adopted by a pack of Kinars, Echo is about to start an adventure of a lifetime which will see her change the world even if she is utterly innocent of what the future holds for her as she gains a new name finds her, one that will bring hope to her people. She will become the legend only known as the Whisperer."

Set over three hundred years in the past, on the familiar world of Alphius Prime, the origin world of the Vu'kno from the Symbiotica and Proteus series, this new series takes you on an epic journey from a very different point of view. Alphius Prime's Whisperer's Saga is more a fantasy style series set in a medieval world where technology and big science have no part as you follow Echo as she learns not only about who she is, but about the unique family of Kinar Beasts that have taken in this lost girl in the snow.
Set in the final years of this unique world before their star collapsed the story is a very personal and touching journey as Echo tries and fails to escape her past but in the process learns of the legacy that is thrust upon her. With dragon like beasts, warlords, oracles and legends, Of Beasts and Monsters will throw you head first in to a strange and facinating world seen through the eyes of a girl as she become a woman, the legend known over the face of Alphius Prime as the Whisperer.

Alphius Prime "Of Beasts and Monsters" is by far the longest novel I have written to date at 130,000 words. It also includes a Proteus Unhinged Mini Story set in the present day entitled "How to Train your Kinar" as Norcee, one of the Proteus ships tries to learn how to care for and bond with her two wilful and naughty Kinar pups. This is the first of three books in the Alphius Prime series as you follow Echo in her youth in the first book, to her maturing in the second and her twilight years in the third as she takes you on a journey that is beyond imagination.