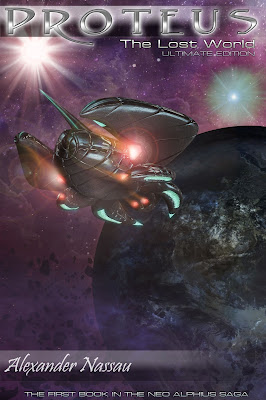 I am very pleased to announce the arrival of Proteus The Lost World, the first book in the Proteus Neo Alphius Saga.
This Story although separate is directly tied in to the events in Symbiotica. In fact a number of the characters make semi guests appearances in Proteus, even if they were in the past.

Here is the Blurb
"For Zenni Quinett, all she wanted was a quiet life. After a horrific accident she retired from her life as a test pilot, living a simpler life growing borra beans on her plantation and healing her host of her injuries. With the shocking news that their world was coming to an end, she finds herself reluctantly thrust in to her old life, dealing with a secret that no one can know. Miras, the living ship she is charged with piloting is more than just a machine of sorts, but a living being with a wilful and arrogant mind of her own.
As the end comes sooner than expected, Zenni find her charge impossible to control. In the chaos, they escape to dead space, the only survivors of Alphius Prime, no clue where they are. She was not responsible, Miras deciding her own fate, ignoring her instructions and acting on her own accord, and so damaged and low on fuel, Miras finds a new world.
Disgraced and dishonoured, unfairly blamed for the mess, Zenni find herself exiled to the Mountains, returning to her simpler life bearing the burden of the secret for the good of her people. For a time they prospered, rebuilding their civilisation but eighty years on, a mysterious plague strikes their world. As their proud city is overrun by the infected, the survivors flee to the mountains and so began two hundred years of hell. Shrouded in a thick red fog, the streets of New Meylon are stalked by foul nightmarish creatures, monsters that were once her own friends and family. For two hundred years they try to survive and find a cure to save those trapped, consumed by this plague without success.
When a little girl from the camp is blighted by the disease, Zenni find herself flung in to a dangerous mission. Together with Prina, her slightly mad friend, they must return to New Meylon, find a drug stored on her former charge and rescue an impulsive teenager hell bent on saving her sister.
Things are not what they seem though. Under that thick red fog, hidden from the world, things are happening. They are being watched by a mysterious force and as their mission unravels, they find something beyond reason.
In the heart of the death and destruction, they find a little girl whose name means hope."

Proteus - The Lost World is an action adventure set on the strange world of Neo Alphius where the survivors of Alphius Prime struggle to survive, fighting not only the world, but their own kind now mindless zombies stalking the streets of their ruined city.
Proteus tell the story of Miras and Zenni, ship and pilot as they struggle to make good the mistakes of their past and bring their people back from the nightmare they are trapped in.
Included with the book is the mini story / reference guide "A Curious Mind" which explains the technology behind Proteus.
at May 19, 2017
Email ThisBlogThis!Share to TwitterShare to FacebookShare to Pinterest
Newer Post Older Post Home