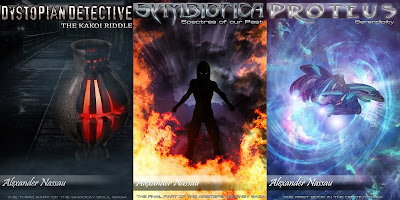 "If there is one thing that always seems to happen on Beletrix it is that they never like things quiet. With the Avoran ship Eclipse now fully reworked and in prime condition once more and Corona refitted and almost as good as new, our friend's curiosity over Eclipse's failed experimental star drive has led to the decision to create one more Proteus ship. She is not entirely Proteus though, featuring a reworked and revised version of the Avoran's experiment.
As Corona and Eclipse leave for Earth, the Proteus family welcome their newest youngster in to their fold, the shy and reserved Ayra. It soon becomes apparent that for all their brilliance, the Avorans were a flawed species and while Ayra can use this experimental star drive, it distorts time more than it does space. Their project was always doomed to fail and Ayra is scheduled to be refitted with a standard Proteus star drive.
For other members of the Proteus family things are returning to normal. Miras and Saya continue to search for the final world for the new Apeyron Empire, while Koli and Cenya return to Alphius Prime to continue the clear out of the Mere Sciences Vault, a place where the most dangerous technology and precious artefacts of their people resides on their long dead home world.
Venturing in to the deepest sections of the Vaults, in a room that has not been set foot in for over three hundred years, Koli and Flip move a piece of equipment only to find something highly confusing hidden behind it. On the wall, etched in to the stone is a message that makes no sense. It is a message that should not be there, written by a person they both know has never been in this room before.
Returning to Beletrix Koli talks with Miras and Terrik, sharing what she has learnt and the inescapable conclusion of what she has found. Knowing this message and what it may hold for all their futures, the three sisters must decide what to do with this information as it could change everything."
at July 02, 2018
Email ThisBlogThis!Share to TwitterShare to FacebookShare to Pinterest
Newer Posts Older Posts Home
Subscribe to: Posts (Atom)