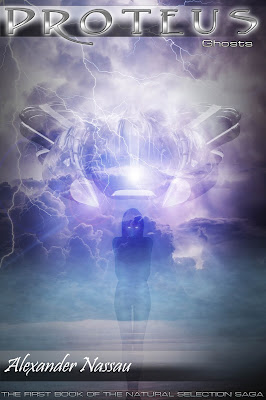 The first part of the Natural Selection Saga, Ghost's is an action pack tense thriller with a distinctly comical side as we follow the overworked, grumpy and arrogant Issi Rem as she tries to get to the bottom of a crisis that is threatening Verlon City, an artificially intelligent virus that has infected the Beletrix network. With the help of Zenni, Saya, Talishia, Tath, Sellie and Tamu, this unlikely group are dragged in to a dark situation with the most unlikely of endings.
Also included is a five page overview and fact file of the Seltus Shipyards and project Valkryia.
at October 16, 2017
Email ThisBlogThis!Share to TwitterShare to FacebookShare to Pinterest

The difference between Novels and Novellas


For years I never understood my editors. I think it is a feeling that many authors get.
For me, the purpose of an editor was to take the creative vision I had and rip it to bits, poke holes in it and reshape the story in to something they thought would sell the most books. It is a cold truth of publishing that great works are sanitised and broken versions of the authors original thoughts.
It is why self publishing appealed to me and with a head full of ideas and books, over the last year I have been having a ball writing these stories.

Sometimes though you have to put the brakes on, slow down and get a good slap across the face and in late September I had that happen.

I love the work I have been doing but self publishing is a brutal industry when you can publish what you want. As can everyone else on this planet. It is something I hate about this. I go on to Smashwords to find my books are swamped and bogged down in "books" that are barely short stories. I see people throwing "books" out that are 1000 words long. Let's just put that in to reality here. That is barely 2 sheets of A4. It's not a story. It's not a book. It's hardly an essay. My daughter writes more for her homework!
As a result, I found myself facing the idea of actually finding a publisher to get my books in hard print, which usually means finding a literary agent, a job that is technically a nightmare. So when I came across a book publisher offering an open door policy for a month, I nearly skipped around the room. I took the time to read their submission guidelines and everything looked good, except for one point.
They wanted 70,000 to 130,000 word submissions.
My books are not that long, averaging 40,000 to 50,000.

Considering everything, this opportunity was too good to pass over, so as a thought experiment I decided to revisit one of my previous books and really see if there was more to them that could be squeezed out. I am not going to say which book it was, but it was roughly 50,000 words.

Sitting down, I fell back on an old technique of analysing the book clinically. Looking at points I may well have missed, seeing the character progressions through the book and really knuckling down. Took me near enough a day, but by the end I had a ten page analysis of the book and to my surprise there were holes.
Quite frankly, I suddenly had a whole new appreciation for editors. I think possibly in the past some of the editors I have worked with were too aggressive and dismissive of the central themes, but they also pointed out potential holes like this. Working through the holes, over familiarity issues and knowledge that was expected from earlier books I started the process of rewriting the book.
After two weeks of work the upshot was this. The finished book was far more detailed, explained things in a more fluid and intelligent way, did not rely on any other works to fill in the gaps and to my surprise had not changed significantly from the original. All the story was there, but just better.
The most important thing was the word count. It was 80,000 words. That was the most shocking part of this. I had found 30,000 words from somewhere.
When I originally wrote this book, I was very proud of it. I had reread it a dozen times and to me, it made sense. Revisiting it though proved a cold truth. There was far more to this book than I had expected.

Now, what came next was a kick in the stomach. Going back I looked at the opening date for this open door submission and I am not sure if I missed this the first time I read it, or if it had been added in but previously it said "If books have been published, they will not be considered". Self publishing was not mention... but when I read it this time, the words "that includes self published" had been put in. My heart literately dropped when I read that and I will say I am depressed. Regardless I will be sending it to them anyway. If it gets binned, then so be it, but technically the book I am sending is not the book I published. I will have to wait and see.

So, why am I telling you this?

Well, it is partly down to the fact I wanted to let people know where I am at and also explain a new thing I will be doing.
After I rewrote that book, I turned my attention back to my current production schedule, specifically Proteus - Ghosts.
I finished writing Ghosts in August - it was a first proof of the book and needed rewrites but overall I had been happy enough to test it out on my daughter. The book was 40,000 words, and probably after rewrites it would have been 45,000.
Sitting down though and applying the same sense checking methodologies to the book, I went through it and looked in extreme detail at the plot, the characters and where I was going with it and started a massive reworking of the book.
Again, the finished article is still the same story, everything is in its place.
What has changed is its size. It is now 70,000 words.

Ghosts will be out very soon.
As for looking at getting my books in print. Well, I will have to wait and see but I hope they will be. The reactions I have had a very positive to my work and I hope that someone out there will see my work as being worthy of being put in to hard print.

Thanks for reading and expect Ghosts soon.