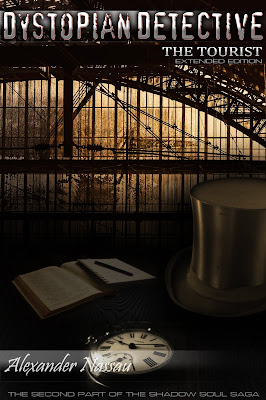 This book also contains the second Shadow Soul mini story as the truth behind the background of this mysterious dark force is brought in to the light.
at September 18, 2017
Email ThisBlogThis!Share to TwitterShare to FacebookShare to Pinterest

The Endless Saga was a veritable explosion in writing for me with so many books being released over a four month period, however a great deal of that was in the works long before I set up my release schedule.
At this moment I have the best part of five books on my desk for writing and things are going perhaps more slowly than I would have hoped partly because I am getting ahead of myself...

When it comes to the Proteus Natural Selection Saga, the good news is I have first proofs of both Ghosts and Evolution done. These will need to be checked and rewritten before I am happy with them and technically it only leaves New Horizons.

The problem with this is, there are several books I wanted to get done and released before Ghosts as they occur ins some cases before Ghosts.
I am currently in the middle of writing Dystopian Detective - The Tourist which is giving me headaches (time travel is a nightmare).
I also have the layout for Pentalore - Legends ready for physical writing although I have yet to hit my keyboard in anger on this.
Finally there is Symbiotica - Spectres of our Pasts which is still mostly in my head.

I am also debating one last book which actually does not fall in to any particular series and would be released by itself. This book fits in to the Symbiotica and Proteus storylines, but it a singular stand alone work that would need to be released before Evolution.