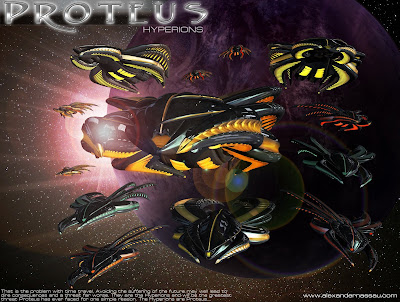 The overall theme of these books explore time travel and the consequences of it and in fact each of the books will show the principle of "For every action, there is an equal and opposite reaction".

Everything really started back in Proteus book 6, at the end of the Endless Saga (or did it really ever end?). A version of Koli from 1700 years in the future comes back in time to warn her younger self of a simple act of kindness that would send the galaxy in to a ceaseless hell. Old Koli succeeded and disappeared, having been wiped from the timeline.

Nothing is ever that simple though.
Future Imperfect, the first saga looks at the Thousand Year war and the fall out of it in our time even though it had been avoided.
300 Years, the second saga deals with the new youngsters that have been brought in to their family although they have to face a new threat, one that could consume the galaxy and one that Koli was partly responsible for.
Legacy, the third saga sees the consequences of these errant time travellers on the chaged future as they have to face a threat unlike anything they have faced before, a threat from within that knows Proteus better than they know themselves.
Finally, there is the Hyperion Saga. I wont tease too much, but Proteus must face their greatest enemy, one that was created as a direct result of the time travellers wake in our time. They are Proteus, but they will become known as the Hyperions, an entirely new breed of Proteus ships that are capable of beating their cousins and they are not under the Alphians control.

This is just the first group of Hyperion class ships. You can see Avaddon, their Titan class leader in the centre. The two aqua marine ships are the battle field doctors, Pluriel and Cassiel. The three yellow tinted ships are their destroyer class ships lead by Raziel. Finally Azreal is the leader of the smaller fighter class ships.

Now for the bad news. You won't get to meet these lot for a while. Actually 34 books from now. I like to plan out my stories and I like to not only flesh out my characters in detail, but I also like to give them form too. That way I know who they are, what they look like and how they behave.
at June 27, 2019
Email ThisBlogThis!Share to TwitterShare to FacebookShare to Pinterest 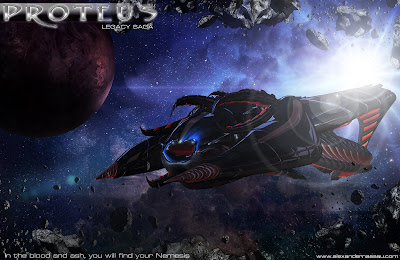 From the future planned Proteus Legacy Saga.
This is the dark ship only known as Nemesis.