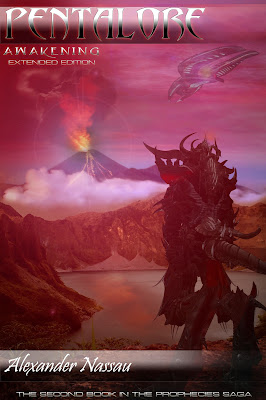 A little back to front, but Pentalore Awakening has now been re-released in its extended version.
As part of the Endless Saga, Awakening was really the last part of that epic story. In Proteus Dark Empire, you get to see the return of Namah and the Aemon to their home world thanks to Zenni and Saya as they try to gain access to the Temple of Apeyra, the remains of a derelict Apeyron Warship on Aemus. In Dark Empire's Extended Edition, you see the story from the Alphians point of view, however in Awakening you see the story from the Aemon's point of view with the character's journey's being explored in far more detail.
The Marcus, Cali and Lexa story has also been heavily reworked and extended with a few surprises and twists added in for good measure.
The book now also ties in to Symbiotica Monsters of Tokyo which in its own way followed on from the story set in this book.

Overall the book now stands at 75,000 words, with near enough 30,000 words of new content.
Previous customers can go back to their retailer and download the updated copy for free.

You can take a look at the book here


On the cover,  this was always one of my favourite covers I have done. All I have added in is the Saga information and the Extended Edition tags as well as being a little cheeky and putting the updated model of Saya in for good measure.
Pentalore's rewrites continue with The Forgotten Library and Darkseed already in the process of being reworked.
Keep watching!
at May 24, 2018
Email ThisBlogThis!Share to TwitterShare to FacebookShare to Pinterest
Newer Post Older Post Home