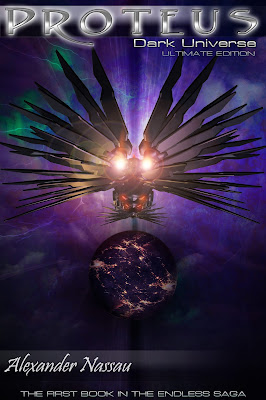 The first book of the Endless Saga, Dark Universe sees the return of Proteus as they embark on a new and darker adventure.


"It has been four months since the events of the Neo Alphius Saga and things on Beletrix have settled down and with both Saya and Miras nearly ready to begin their work of exploring the stars and helping to bring their civilisation back to its former glory. With the unexpected rescue of survivors from Alphius Prime, things are not entirely harmonious though with an old feud between Zenni and Talisha Betar being reignited however things are about to take a dark turn for our friends as they are dragged in to urgent rescue mission when Lunar, Miras's younger sister ship suffers a terrible disaster mid jump and is stranded in subspace.
Mother and daughter working together must try and rescue Lunar before she is utterly lost and a daring plan is formed however within subspace itself, things are moving that should not be in this empty lifeless dark universe as a new and menacing threat emerges. With time against them and lives at risk will Zenni and Saya be able to save the Lunar and her crew, and what terrible discoveries will they find hiding in the space beyond our universe?"

Following on from the Neo Alphius Saga, rejoin Zenni and Saya with the rest of the crew of the Proteus series as they embark on a darker and more disturbing path. This first part of the Endless saga will have ramification in Symbiotica, Dystopian Detective and Pentalore as a new threat from beyond our universe is revealed, a threat to Earth, Aemus and Beletrix as well as all life in our Galaxy.

Dark Universe is a fast paced and dark scifi thriller which will turn the world of Proteus inside out as the Alphians face off against a militaristic race living in subspace who are more technologically advanced than they are and who seem to lack compassion or morality, threatening everything in their domain.Now in its Second Extended Edition with over 30,000 words of new content Dark Universe has been heavily reworked and revised. This Extended Edition takes the original story of Dark Universe and paints a far more vivid picture as you follow the cast of Proteus facing a new and dark threat that may well consume everything in its path.

It is the longest day of the year and it seems fitting to release the first collection of the Endless Saga  on this day as that is actually when the books take place. As you can see this is unusual for me in that three books have been released on the same day, and there is an important reason for this. Each of the books crosses over as the worlds of Dystopian Detective, Pentalore and Proteus collide.

The Apeyron threat continues with another triple release in July with Proteus - Dark Empire, Pentalore - Awakening and Symbiotica - Monsters of Tokyo continuing the Endless Saga.

Go grab a sample and it is worth noting that while the books cross over, you don't necessarily have to buy them to get the full picture. They are all but self contained and events from the cross overs are explained in an isolated way within each of the books.