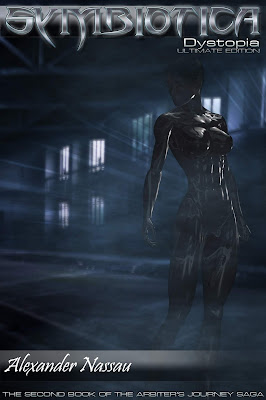 Symbiotica is back, and this time its crashing down to Earth.

Here is the blurb!
"She should have been happy. More money than she could ever imagine with all the luxuries and security it afforded and a new best friend in her life in the shape of her alien partner, Ella Carr had everything she wanted. Regardless very little had changed in her life. Stuck between two worlds with neither of them accepting her, she never felt more alone, especially with her ex lover living on another planet now.
With a dark political change sweeping Earth and governments becoming increasingly fearful of anything different, the group make a decision to ensure their future safety. Two new facilities are planned, one in Japan and the other in England giving the group options in case things take a more sinister turn and it is up to Ella and Brie to break ground on the UK operation.
Travelling back to Manchester to establish the head office, Ella still feels lost, but it's not long before she's reluctantly dragged in to her old life once again. With her friends in grave danger Ella must balance her secret against her duty to the people she loves as she is pulled in to a dark underworld of money and violence.
Meanwhile back in the United States, Sheriff Lofthouse is faced with a dark dilemma. Her former partner from New Oxford City Police, Sarah Ash is still in a coma after the injuries she sustained in the line of duty and she faces an uncertain future when those who were charged with her care abandon her and Sellie has to come to terms with the fact her best friend is dying. Sellie must decide if she is to let her go or to take more radical action which could put everything she has worked towards in her life in jeopardy.
Will Sellie get Sarah the help she needs possibly at the cost of her own career and freedom, and will Ella be able keep her secret while saving her friends and finally find a place where she can be happy?"

Dystopia continues the 'Arbiter's Journey Saga' in this fast paced and thrilling second instalment as Ella finds herself fighting a dark criminal underworld with the lives of her friends hanging in the balance. Now rewritten and extended with far more detail and character development Dystopia also now features an entirely new story as you follow Sheriff Lofthouse as she is faced with a terrible decision that could very well end her career as she fights to save her best friend's life.
Now twice the book it used to be with 33,500 words of new content this Ultimate Edition of Dystopia brings an entirely new angle to the world of Symbiotica as the prelude to the Dystopian Detective Series. It also includes the Proteus Unhinged Mini Story 'Sight Seeing' as Koli is let loose on the city of Manchester.
at May 19, 2017
Email ThisBlogThis!Share to TwitterShare to FacebookShare to Pinterest
Newer Post Older Post Home