Symbiotica Book 4 - A Matter of Time 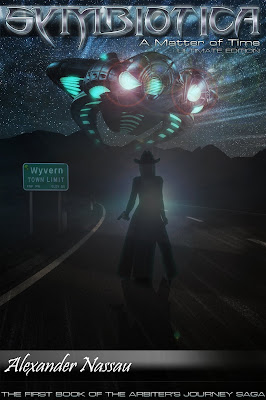 I am very pleased to announce the long awaited return of Symbiotica in this action comedy adventure featuring some familiar faces as Ella, Tie, Flip and Koli join forces with a small town Sheriff to solve a big mystery.

"It was supposed to be the start of a new chapter in Sherriff Lofthouse's career, having transferred from the daily mayhem and murder of the big city to the sleepy town of Wyvern, a place were very little happens. After only a month in her new job, she is called out to a very mysterious death, the victim mummified after only a matter of hours after last been seen. With little to go on, no suspects or motives, she is about to reluctantly close the case, when a second body is found, mummified in a similar horrific way as she finds herself thrust in to what appears to be a murder enquiry.
Catching two individuals snooping around the first crime scene she drags them in for questioning, but things are never what they seem as she realises she has met them before from a case that still haunts her. However when the Stationhouse is destroyed by a mysterious energy wave, she is forced to trust her odd prisoners and find herself on a wild ride in to the impossible, travelling to places she never imagined and meeting creatures that are beyond belief.
Will Sheriff Lofthouse and her new friends get to the bottom of this mystery that is now threatening everything she holds dear and ultimately where is this journey taking her?"

A Matter of Time sees the return of Symbiotica in this tense, funny and slightly insane romp around our galaxy as a small town Sheriff gets dragged in to a very big secret head first with Tie, Ella, Flip and everyone's favourite bonkers little ship Koli. The stakes could not be higher and with Earth under threat can they solve this mystery in time, or will Ella just end up strangling Tie?
Reworked and heavily expanded, this Ultimate Edition of "A Matter of Time" features 28,000 words of new material including richer back stories and character expansion as the book becomes the first part of the "Arbiters Journey Saga". In addition to the main story is a new Proteus Unhinged mini story, "Winds of Change" which sets up for events in the next book, Dystopia.
at May 19, 2017
Email ThisBlogThis!Share to TwitterShare to FacebookShare to Pinterest
Newer Post Older Post Home