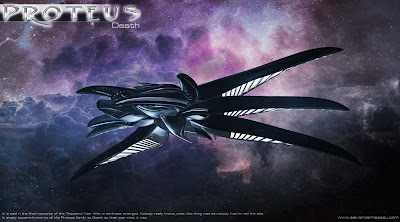 It is said in the final moments of the Thousand Year War, a darkness emerged. Nobody really knows what this thing was as nobody lived to tell the tale.


It simply became known to all the Proteus family as Death as that was what it was.

(I lied... I said there would be 45 ships in Proteus Unbound... revised that a little up to 51 although technically the last six ships really don't feature in Unbound. I'm a stinker...)
at August 27, 2019
Email ThisBlogThis!Share to TwitterShare to FacebookShare to Pinterest
Newer Post Older Post Home