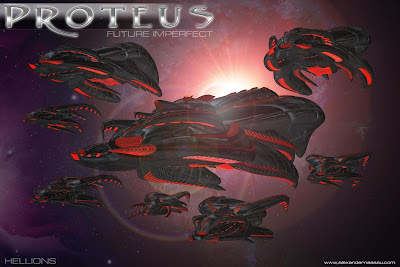 In the darkest period of the Thousand Year War, the Alliance and the Apeyron were in stalemate, neither side capable of putting end to this circle of insanity.
As the two great enemies, the Aemon and Archals finally put aside their differences they embarked on a secret project. Both races knew the truth, that while heroes are forged in the fires of war, heroes would not be the one who would win the war.
To do that, you needed villains. Monsters without morality, without conscious and without mercy.
As Proteus worked on the Starlance Weapons platform, a planet killer designed to be the ultimate deterrent, the Aemon and the Archals took the Proteus genetic archive and in secret created their own weapons. Twisting the Proteus Genome, bastardising it they created the Hellions, the first true male Proteus Warships.
Bloodthirsty and ruthless, the Hellions were everything these two ancient races had hoped for. Freed of the morality of their creators, this offshoot of the Proteus family tipped the scales giving them the upper hand. However their arrival strained the Alliance to its core, Proteus unable to control their new brothers and in the end they were banished, forbidden from entering the war, not that it stopped them.
Then things changed. The Hellions had made an impact on the war, forcing the Apeyron in to deeper darkness as the Archals homeworld of Arisal was destroyed in retaliation ending another of the great races of the Empire.
It is not surprising that at this point of the war everyone was focused on this atrocity rather than something that would come to light much later. Emperor Razon had been rumoured to have left Apeyra on a mission to save the Empire, and at almost the same time the Hellions disappeared. Neither Razon or the Hellions were ever seen again.
In dark whispers around the alliance it was rumoured that Grand Council Servay had made a deal with the devil, sending Novak and his team of brigands after the Emperor to cut the snakes head off and end the war. Even if this was true, the war did not end, the fight growing desperate and vicious.
It is still the one mystery that nobody ever revealed though. What was the fate of Emperor Razon and the Hellions that were sent to hunt him down and kill him?
at April 01, 2019
Email ThisBlogThis!Share to TwitterShare to FacebookShare to Pinterest
Newer Post Older Post Home