Proteus Of Darkness and Light Released 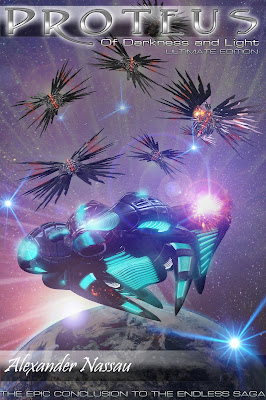 The Endless Saga reaches its Epic Conclusion in Proteus - Of Darkness and Light.

"The Apeyron have returned to our galaxy with the threat of wiping out all intelligent life on Earth and the Demon home world of Aemus to reclaim what they see as their Empire however thing have taken a surprising turn with the defection of the young Apeyron warrior Tath now providing his insights and assistance to stop this madness before it begins.
With the creation of new defensive and offensive capabilities for the Proteus ships and the arrival of the Aemon's and human forces on Beletrix, the stage is set as three worlds are ready to fight for their own survival against overwhelming odds.
However the story is not complete as the hidden history of the Apeyrons is decoded with surprising revelations and twists buried deep in their past as the truth about the their history is revealed. Their plan is simple. Stop General Razon's insanity by invading Apeyra itself to revive the Emperor of the Apeyrons in the hope of restoring order.
With only four Proteus ships at their disposal facing a fleet of hundreds of Apeyron warships, will Zenni and Saya be able to put a stop to General Razon's threat of genocide and end this war before it begins?"

Of Darkness and Light is the epic conclusion to the Endless saga as the fate of three worlds hang in the balance. With the unexpected generosity of allies and surprise revelations from people they thought were their friends this is full on action adventure and the Alphians are playing by their own rules of war in an effort to bring peace.
Of Darkness and Light is now in its Second Extended Edition with over 30,000 words of new content, heavily reworked and revised. Taking the original story this reworked edition paints a far more vivid picture as you follow the cast of Proteus as they fight for the worlds of the Empire while also facing their own inner demons as they try to come to terms with the fallout of events.
The book also features a Proteus Unhinged mini story "Paved with Good Intentions" featuring Koli and Flip as they face a shocking revelation and meet someone they never expected.

Cover artwork feature Saya facing off against the Apeyron fleet over Earth. It was about time I put those dark wraith like ships I designed to use.
at August 18, 2017
Email ThisBlogThis!Share to TwitterShare to FacebookShare to Pinterest
Newer Post Older Post Home