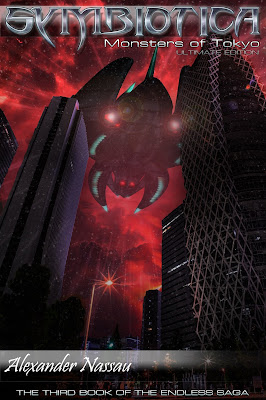 Monsters of Tokyo is a fast paced action adventure with more than a few laughs along the way as everyone favourite enemies, Tie and Ella have to join forces in order to end a global catastrophe and finally convince Secretary Sanchez that the Apeyron threat is real in an adventure where our future hangs in the balance, even if Tie can't stop being a complete nutcase.
Monsters of Tokyo is now in its Second Ultimate Edition with over 32,000 words of new content, heavily reworked and revised. Taking the original story of Monster of Tokyo this reworked edition paints a far more vivid picture as you follow the cast of Symbiotica dealing with the fallout of events in Proteus Dark Empire as they try to save the world from being swallowed in darkness.
at July 30, 2017
Email ThisBlogThis!Share to TwitterShare to FacebookShare to Pinterest
Newer Post Older Post Home