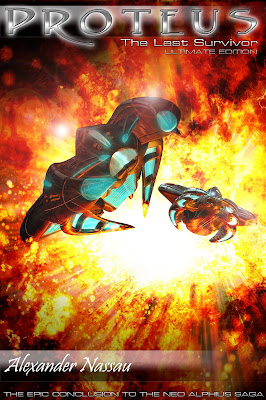 It’s here. The epic conclusion to the Proteus Neo Alphius Saga in the shape of the Last Survivor.

"For Zenni and Saya, the weight of their world is on their shoulders as they return to Neo Alphius with new hope having found their long lost kin, no longer survivors, but thriving on a strange alien world called Earth. Returning with Miras's sister ships Terrik and Lunar along with all the help their stricken people need, it soon becomes clear the situation is more critical than they imagined.
At Miras's heart is an experimental reactor that only her conscious mind can control and with Miras dying, Zenni and her new friends must urgently cure and evacuate the survivors of their hellish world. Therein lies the problem. With twelve thousand survivors to relocate, they need a new home world.
As it seems though the answers to their dilemma are in the past, not the present with the exploits of a little ship that escaped their end of the world as part of Koli's three hundred year story is finally revealed along with a surprising new hope.
Will the people of Neo Alphius find their new home, what really happened to the small crew of Koli in the years they searched the stars and will Zenni and Saya honour their promise to save Miras from her fate?"

The Last Survivors is the thrilling conclusion to the Proteus Neo Alphius Saga with the worlds of Proteus and Symbiotica colliding head on as the race to evacuate Neo Alphius begins.
Featuring a retrospective from the author on Proteus and also a second "Proteus Unhinged" mini story.
at May 19, 2017
Email ThisBlogThis!Share to TwitterShare to FacebookShare to Pinterest
Newer Post Older Post Home