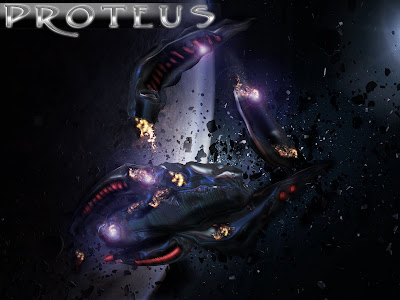 In Symbiotica - The Way Home we learn that Terrik managed to barely survive her escape from Alphius Prime. Near death having been hit by the shockwave from the collapse of the Alphian star, she only just made it in to orbit. I often wondered what this scene would look like, and this is it.
She does survive thanks to her crew, but having lost her stardrive and remaining in a critical condition, the best she can do is limp to what could only be best described as a safe port and hope someone will come back to rescue them.

From Symbiotica - The Way Home


"Status commander," she croaked, a drip of blood running from her lip.
"Multiple hull breaches, no propulsion outside of manoeuvring thrusters, engineering reports the matrix drive is all but destroyed. The ship sustained considerable damage from the breaches alone. Sensors are totally inoperative so we have no idea where we are. Sublight engines are heavily damaged, but engineering are currently working on those right now. We should have them repaired in approximately five hours, that's if we last that long. At current estimates we have less than four hours of reserve energy left," she replied, her heart heavy.
"What of the other ships? Did they manage to escape?" Neyra asked frowning up at her.
"We were in high orbit when the plasma storm hit," she sighed. "The Titan's were barely off the ground. We don't know if any of them survived, but we can hope. What are your orders?"
"Have all decks report. We need damage assessments. See if Terrik is able to give us anything or at least how we can help her. Priorities right now are life support and getting us moving. We will deal with whatever comes next. Check to see also if Alphius Five's orbital platform survived the initial plasma wave. If it did, we may find safe port there for a time."