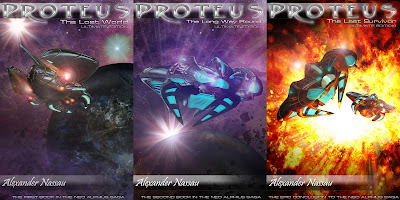 A little over a year ago, I released the original Proteus Neo Alphius Saga. This epic saga sees the fate of the lost Titan hinted at the end of Symbiotica The Way Home as you take a journey with Zenni and Saya as they try to save their people from their fate.
For me this was the start of the Proteus journey as I delved in to the weird world of the Proteus ships and at this moment, writing books 10 and 11, the Proteus universe has grown massively since these first books. So I decided to sit down and as I have mentioned before, rewrite them.
Overall the story is the same as the one you already know, but it is heavily expanded and extended. Overall you get 95,000 words of new content over the three books or, compared to the originals, that's two additional entire books worth of material!
I have actually released four books as I have also produced the extended box set edition of the Neo Alphius Saga too.
For those who have bought this book before, head back to your retailer and grab the new copy.
Enjoy!
at March 17, 2018
Email ThisBlogThis!Share to TwitterShare to FacebookShare to Pinterest
Newer Post Older Post Home