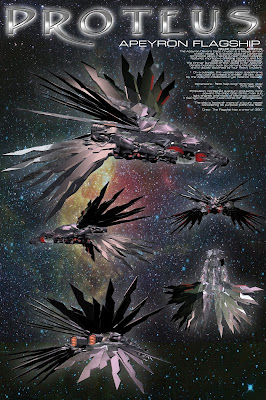 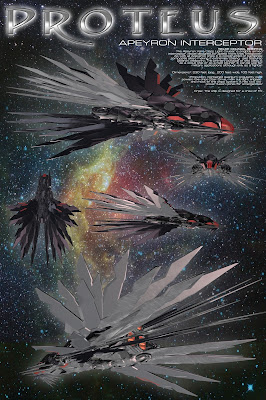 Following on from the sneak peak at the Harbinger, I thought I should take a look at two other Apeyron ships that have featured heavily in both the Proteus Endless and Natural Selection Sagas.
The Apeyron have fearsome ships, but not all of them are for military purposes. The first datasheet is one of the Imperial Flagships. There are two in the books, Razon stole one of them and the other gets near enough wrecked in Evolution by Razon's forces. This is a big ship and it also forms the basis for their Science vessels although they are different.
The second picture is one of the Interceptor class of ship are small fast designs with mutifunctionality, working for both civilian and military use. These ships are however designed for speed more than firepower. Fans of the series will realise this is the ship that Tath escaped in to defect to the Alphian's cause.