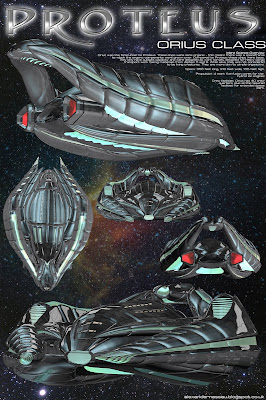 Long before the Proteus class ever saw the light of day, the Alphians did have space ships. I deliberately didn't say starships because technically this isn't one. Orius was designed as a very advanced cargo ship designed to travel to the Alphius 5 and 8 space and mining stations where it would load raw materials such as precious metals.
When Proteus was rushed in to service, the 10 Orius class ships used by the Alphians were rapidly decomissioned, the parts transferred to Proteus.
While considered to be semi organic living ships, they had no brain or nervous system as such, and as a result were not considered to be alive.

The Orius class of ship while never really featuring in Symbiotica and Proteus is constantly referenced and I thought it would only be fair for you to see what I was thinking with it.
You can definately see almost the family resemblence to Proteus, but at the same time these ships are far more primitive.
at June 22, 2018
Email ThisBlogThis!Share to TwitterShare to FacebookShare to Pinterest
Newer Post Older Post Home