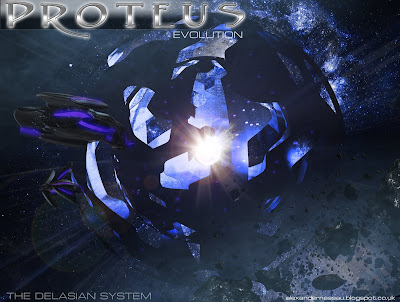 There was silence as they arrived, simply staring out of the window at the view. In all her life, she had never seen anything like it. She knew where she was in technical terms, the data Koli was imprinting on her mind clearly showing they were in human terms in roughly the same position as Jupiter was from Earth. She looked at her friends as she stood up, Koli releasing her as she dropped down to the floor, even her animated friend deathly silent as she reconfigured herself.
"I don't get what we are looking at," Jo commented in almost a whisper glancing to Joulik who shrugged her shoulders.
"It's an artificial structure," Lyphius commented finally breaking her gaze looking to the readings Koli was gathering. "It's two hundred and fifty million miles across, larger than the orbit of Earth around the sun. Although it's broken with sections exposed, it has an internal surface area over five hundred million times the size of the surface of Earth. There are cities, oceans and more clinging to its inner surface."
"It's a Dyson shell although different," Kat whispered in shock, "I remember a scifi show where there was an episode that featured one. It is a theoretical structure that can capture massive amounts of energy from the star it orbits, but the engineering alone is mind boggling. Samantha, my sister is a researcher in theoretical astrophysics. She was obsessed with the idea. It was put forward by a physicist called Freeman Dyson, although technically this is an incomplete structure."
"You're saying that thing is a world?" Jo stammered in disbelief.
"Not quite an accurate description, but in practice yes. There could have been hundreds of billions of these Avorans living there, but Koli's scans are showing no sign of life, not even primitive," Lyphius said in a dark tone, "Whatever future Koli warned us of killed their whole race."
"The promise of unlimited energy," she whispered as finally Koli broke her gaze, almost jumping.
"I am detecting life signs," she said nervously, "The system is reasonably clean so I can navigate us to them."
"Confirmed," Lyphius said as their mission started to sink back in, "I have five faint life signs in scanning range. They appear to be the Avoran ships."
She watched as a single tear left Koli's eye as she looked at her questioningly, Koli visibly upset.
"You are not seeing what I am seeing," Koli sighed mournfully, "There were tens of thousands of ships here. Their bodies are lifeless floating in space."
"Focus on the living ones," she replied comfortingly, "See if you can talk to them. Tell them that Aurora has sent us and we are about to set up some equipment to rescue them."
"What I said was true Phillipa," Koli whispered, "The Avoran system is a place of wonders and death. So much death."