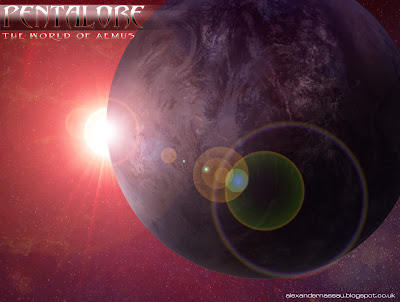 I have already eluded to Aemus in the recent sneak peak at the Children of the Empire Saga, but with Pentalore still ongoing I wanted to give you an idea of what Aemus is like. 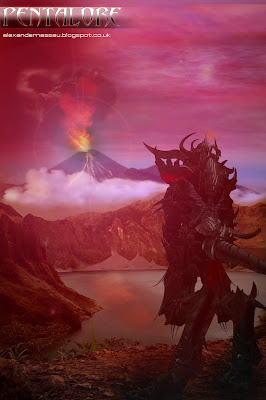 This is the cover from Awakening that shows what Aemus actually looks like ith a fully kitted out Jorstus warrior looking over the world. I wanted to give Aemus a very red feel, adding in purples to the mix to give almost a hellish feel to it, but if you look closer you can see that Aemus is a world rich with life. 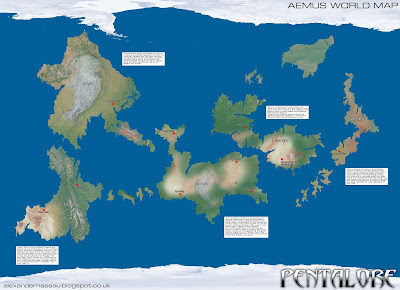 The idea of world building is something most writers are familiar with, although for me, that goes much deeper. Penatlore and Proteus really do take us to new worlds and considering the detail I am going in to with the books, I decided to actually build a world...
This is the world map of Aemus. It has load of locations and give you a clear idea of what hell looks like... and its not very hellish at all. Aemus is a volcanic planet but the fact is that makes it a world rich with life.
I have put in detail of the nine demon races that live (or in two cases lived) on Aemus.

Anyhow, I will also be looking at Alphius Prime and Beletrix as well to really give you an idea of what these worlds looked like as well as a more detailed overview of the world and their solar systems too.

Enough from me... for the moment at least

Apologies for the size issues - not sure why but this is not uploading at its original size...

Here is the Text
Top Left - Jora - The bleak Northern Continent of Jora is a hard and unforgiving place home to the mountain dwelling and nomadic Jorstus. This continent is rich with life and offers excellent agriculture. Harashia is the  Jortus capital city built to form a focal point for their society as well as for religion and trade.

Bottom Left - Volem - Volem was a rich continent before the Darkening however even now its southern side is a barren wasteland. Home to the once proud Vola race in the south and the Necroswaben in the mountains of the north, the Aemon do not venture down to the Vola’s lands out of respect for this fallen race. Votae city is the former Vola capital which is now in ruins. Nekal city is the Necroswaben capital however is it underground and no outsider has ever seen it.

Middle Bottom - Syna - The continent of Syna is a beautiful and diverse place with towering mountains, deserts and forest. Gehai located in the south east is the capital of the Geneistus.
To the west is Desi, the capital city of the Sythar while far to the north west is the Karae city, capital of the Hakoran.
This central continent forms the back bone of modern Aemon society and as a result of this, on the equator is the great Aemon Capital city of Naran. Built after the Darkening this city is the hub of power, trade and society on Aemus.

Top Right - Sayir - Sayir is a divided land which both the Satirus in the north and the Kaliso in the south call home. Salta is the capital of the Satirus and is often called the industrial heartland of Aemus.
Ysola is the Kaliso’s capital offering a beatuiful land to vacation in with many different and beautiful places to see. To the west of the Kaliso's land is the terrible and forboding Fire Deserts. This whole area is the location of a hot spot under the surface forming a super volcano, however with this being a desert, the sands have crystalised in to glass, which has shattered over time forming the most spectacular and deadly place on the planet. This is also the location of the Temple of Apeyra, a dark relic from their worlds past and the cause of the war to end all wars on Aemus, the Darkening. It is now understood to have been the remains of an Apeyron Warship that crash landed and was abandoned.

Bottom Right - Lehes - The continent of Lehes is a forbidden place on Aemus. Former home to the vicious and cruel Lessenholk, this place is now a dead continent, poisoned and diseased. After the Darkening, Moteth city was left to crumble after the allies found the Lessenholk were devolving. It is said these monsterous animals that were formerly a superpower on Aemus stalk the lands doomed for their genocide of the Vola.
at May 27, 2018
Email ThisBlogThis!Share to TwitterShare to FacebookShare to Pinterest
Newer Post Older Post Home