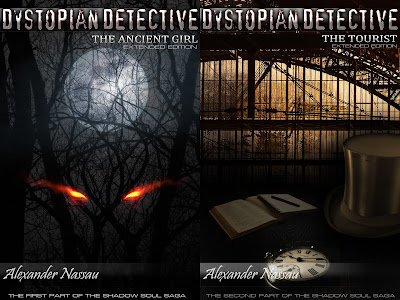 Another month, another re-release!
This time around it is the Dystopian Detective that comes in for the full rewriting process, taking the original stories to the next level and even I have to say you're in for a treat. Over the Ancient Girl and the Tourist you have nearly 65,000 words of new content, near enough doubling the size of the original books.

For the Ancient Girl it has been heavily rewritten and extended offering a proper introduction to the series that people unfamiliar with it will need as well as adding far more detail and character journeys in.

For the Tourist again it has been heavily rewritten and extended, although with this book you actually get an entirely new sub story as you follow the adventure that Amy and Shae go on as they try to track down the mysterious Manga author who is threatening to expose the secret of what happened in Symbiotica Monsters of Tokyo.

You will have noticed that I have officially made the first five books of the Dystopian Detective in to an overall Saga now. Titled the Shadow Soul Saga, you now also get an introduction to this in the Ancient Girl and a full mini story in the Tourist devoted to the dark force that is threatening Manchester.

On the covers, yes this may be unusual, but they are actually the same beyond the Saga information and the Extended Edition tags.

I realise that so far this year I have only released one new book and I know that people are wanting to see what comes next, but these rewrites do have their purpose as they revisit and extend all the series I have done, but also set up for the new books that are coming. In total so far I have written 488,000 new words of content across the 17 books so far re-released. Taking the fact the original books were roughly 40,000 words each, that means I have added 12 entire new books of content.

Dystopian Detective - The Kakoi Riddle is the next book coming up and while this dark force that has been lurking in the background of the first two books has been playing a long game, needless to say she is taking the gloves off as Ella will come face to face with her dark nemesis for the first time and there are going to be more than a few shocks along the way.

Anyhow. I hope you enjoy these heavily revised and extended editions.
Pentalore next and just three books to go before normal service resumes!
at May 14, 2018
Email ThisBlogThis!Share to TwitterShare to FacebookShare to Pinterest
Newer Post Older Post Home