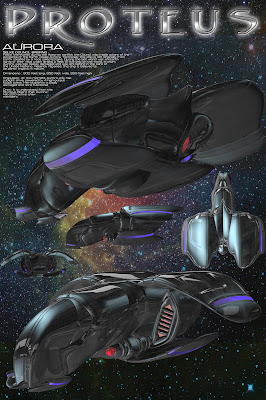 Hinted at in Symbiotica Monsters of Tokyo and making her first appearance in Proteus Of Darkness and Light is Aurora.
Aurora is an Avoran scientific cruiser that ended up stranded on Earth after her crew abandoned her after she suffered serious damage.
Now partly restored she faced off bravely against the Apeyron fleet alongside Saya in the defence of Earth however while her acts were noble and she proved she is a force to be reckoned with, Proteus Unhinged revealed a potential darker future that starts with Aurora's need to find her sisters that travelled with her to Earth, then left her to return to the Avoran system.

In the upcoming Natural Selection Saga, Aurora will play a much larger role as our heroes try to fight the future.
Enjoy!
at August 22, 2017
Email ThisBlogThis!Share to TwitterShare to FacebookShare to Pinterest
Newer Post Older Post Home