Coming next month is the beginning of something I have been hinting at for a while now.
The Endless Saga, which will kick off with a triple release.
Firstly is the arrival of the new series, the Dystopian Detective featuring Ella Carr from Symbiotica with Shae and Amy they are investigating the impossible, in the only way the impossible could.
This is then joined by the first Pentalore book, Darkseed which sees the beginning of a five part series.
Finally the return of Proteus as they venture in to the Universe beyond our own to save Lunar but discovering there are nightmares waiting in this Dark Universe.

Yeah, I know... I have told you this already... but... I am pleased to say, I just completed the cover artwork this morning. 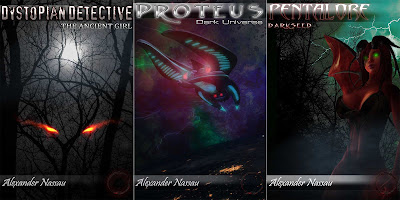