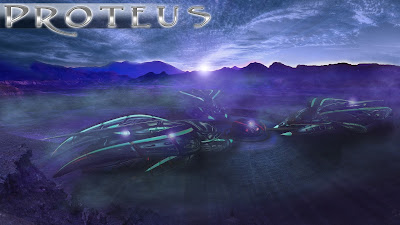 It is a sight hard to imagine. A ship yard with the three Titans, Miras, Valla and Koshi all circling the elder sister Terrik. I thought I would give this scene some form with a daybreak style shot.

"She looked over the flats from there vantage point on this sandstone outcrop. In front of them, Miras, Koshi and Vaj were resting and from here, it was hard grasp the scale, but watching the tiny dots by their side moving away from tiny toy like transports, it put things in to perspective. These ships were nearly three thousand ottons in length. Easily as large as a town. Inside each were filled with twelve thousand stasis pods, and those little dots moving inside were people, preparing for their journey."
at May 19, 2017
Email ThisBlogThis!Share to TwitterShare to FacebookShare to Pinterest
Newer Post Older Post Home